Amazon has established itself as one of the big four companies along with Google, Apple, and Facebook. Amazon focuses on e-commerce, digital marketing, cloud computing, online surfing, artificial intelligence, etc. The most popular events held by Amazon is its Prime Day Sale. Amazon first started Prime Day in 2015, and it soon became the biggest shopping day event; with over 89 million buyers, as recorded in 2018.

Amazon hasn’t yet officially declared the date and timings for Amazon Prime Day 2019, but from the past few years trends, we can assume that it’ll be soon held in the mid of July. As seen in 2018 Prime Day, the sale took place on Monday, 16TH July, from 3 PM ET and continued for the next 36 hours. With every passing year, Prime Day has been lengthened, 24 hours as in 2017 and 30 hours as in 2018, so based on this trend we can predict that Prime Day 2019 can be even longer.

As Prime Day is still almost a month away, we’ll be focussing on some of the best ongoing deals.

If you want to access the irresistible deals of the Prime Day, then you need to sign up as an Amazon Prime member. Apart from the deal, you’ll also get access to Amazon Prime’s Database for tonnes of different movies, songs, books, photos, etc. If you still have any residual doubts about the quality of the services, then you can avail the 30 days trial, and if unsatisfied, then you can cancel anytime.

You need to have an Amazon account and a valid credit card linked with your account. The prime members also have access to two-day delivery facilities.

One day Delivery for Prime members

Recently, Amazon declared its initiative of one day delivery for the Prime members on most of the orders. Brain Olsavky, Amazon’s CFO, declared that they’d be investing around $800 million for upgrading the logistics network for one day Prime Delivery.

At present Amazon offers, two days free delivery for the Prime members, and one day & same day deliveries in a handful zip code. 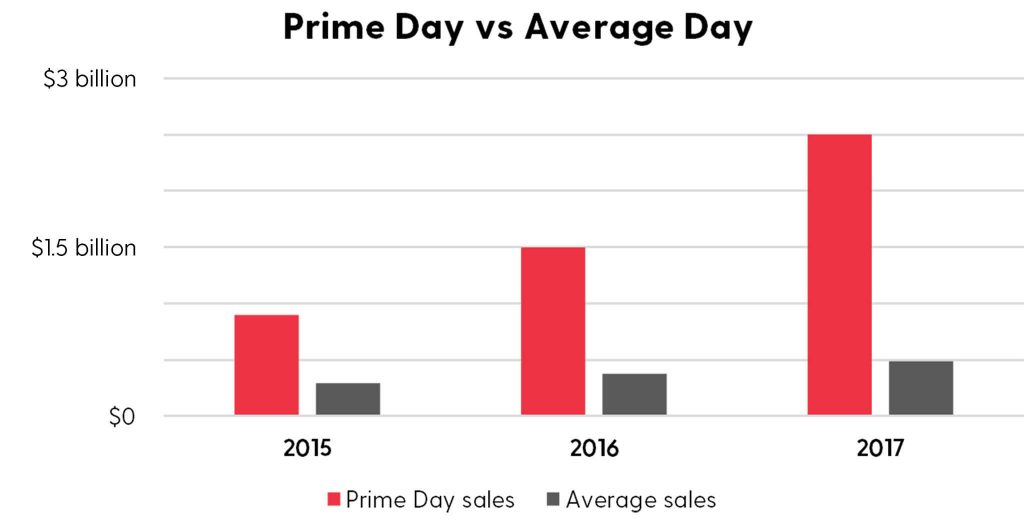 As per the Prime Day sale in 2018, Amazon is believed to have a gross income of $3.4 billion. Although no official document was released from Amazon’s side, they declared that the third party sellers were successful I selling products of worth $1 billion, in one day.

Last year on Prime Day, Amazon’s site crashed because of the massive amount of traffic and lack of sufficient amount of servers. The customers found their cart getting empty all of a sudden, and then the next moment they were unable to access the site as well. Few sites even got their calculators shut down, which almost lasted for about 63 minutes.

To prevent the repetition of such mishaps, this year Amazon has taken certain preventive measures such as increased number of servers to cope up with the tremendous traffic, improved navigation and the discover-ability of the deals, etc.

Amazon Prime Day is undoubtedly one of the largest shopping day events; offering some great deals, and surpassing events like Cyber Monday and Black Friday.

With Prime features, you can avail facilities like One day or same day delivery and can opt for deals which are exclusively for the Prime members.

How the Gaming Landscape has Changed in the Last Decade

How to Make Your Tumblr Private

16 Useful MacOS Terminal Commands You Probably Do Not Know

Windows 10 Game Mode: What is it and how to activate...