Manufacturing automation may appear to be a recent notion to some people, but it dates back several decades. However, the difference between then and now is introducing new technologies that help industries gain more control over their operations.

The value of factory automation is well over $200 billion. In addition to establishing operational control, automation of production methods, master schedules, and advancements, manufacturing automation increases production capacity while simultaneously keeping costs down. 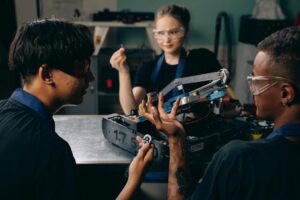 The field of manufacturing automation is quite broad. Therefore, a wide range of automated technology solutions exists for dealing with different issues. Here are a few illustrations:

Hard automation, which is the other name for fixed automation, is a collection of many diverse sequences and industrial methods put together in one place. It may be challenging to change production procedures after equipment installation, especially when considering the significant initial investment necessary for its design and technological development. The most common fixed automation examples include:

Programmable automation, as the name indicates, is a production process controlled by a program. An application program is a series of directives that the system reads, understands, and then executes.

The following are some instances of programmable automation:

The programming of the systems that control the equipment is the responsibility of the personnel. Human Machine Interfaces (HMIs) are an option that they can choose to employ. In this design, centralized system software monitors the functioning of the production and material handling processes.

Furthermore, it is an excellent choice if you wish to create several different product categories simultaneously. Batch production is most suited to flexible automation because of its flexibility.

The following are some applications of flexible automation:

What is The Role of Robotics in Manufacturing Automation?

Robots are highly prized for various reasons. They are dependable, consistent, accurate, repeatable, and resistant to dangerous environmental conditions.

In contrast to humans, robots cannot adapt to unforeseen situations or enhance performance based on past experiences, as people do. Some of the most popular robotic applications in manufacturing automation are as follows:

As the expense of physical labor in assembly processes continues to climb, the use of robots in assembly is on the increase. Furthermore, robots use programs, which make it simple to automate assembly methods. Before performing any actions, robots must first comprehend the design of the product.

Another area of manufacturing automation in which robots might be beneficial is processing materials and products. Spraying and painting, spot welding, and arc welding are only a few of the most common types of fabrication and processing activities. For car bodywork, such as frame and panel construction, spot welding is a standard application in the automotive industry.

Spraying and painting are two processes in which a robot manipulates a spray-painting gun across the surface of a coated object to apply paint. In arc welding, a robot moves a welding rod over the seams of the product in a continuous process. Routing, polishing, grinding, and deburring are just a few other processing techniques that a robot can do.

The use of robots in manufacturing automation includes the transportation of items from one location to another. Several of the material handling operations carried out by the robots is straightforward in their execution. Picking and placing applications, for example, are generally specific.

On the other hand, the automated machines also perform other sophisticated applications, such as palletizing in patterns that they must compute. One example is the loading and unloading of objects with the assistance of a gripper connected to the mechanical arm.

Machine inspection is yet another domain of manufacturing whereby robots are increasingly helpful. In a standard inspection task, the robot attaches a sensor to the work component and determines whether or not the item meets the quality standards.

What are the Advantages of Automated Manufacturing?

Manufacturing automation is rapidly becoming a need rather than an option in manufacturing operations. The utilization of robots and artificial intelligence provides you with a significant competitive advantage over your competition.

The following are the benefits of incorporating automation into your manufacturing operations.

Although it requires a significant upfront cost, automation gives exceptional long-term value for money. A single robot can accomplish the tasks of three to five, or perhaps more, human workers.

Several manufacturing processes need employees to operate in potentially hazardous situations. However, the introduction of automation of the production floor is tremendously changing the position. The machines take over the dangerous operations while human workers relocate to safer activities.

Apart from operating unsupervised round the clock, robots can also keep the same pace throughout. As a result, your manufacturing process runs continuously and more effectively, which increases production.

Overall, robots are more accurate than humans are in the performance of industrial jobs. Furthermore, they retain the same level of manufacturing quality throughout the process. Better uniformity and consistency will result in a decreased percentage of defects in the final product.

The efficiency of automation by using robotics and AI is changing the way of doing things in the manufacturing sector. Automation makes everything easier, increases production, improves product quality, makes the workplace safer for both machines and humans, and cuts costs.

With new entrants in the market, such as the collaborative robots, which have smaller footprints, you can also count saving floor space as another advantage of automation.